If you are experiencing problems with intrusive thoughts or images, obsessional levels of worry, overthinking, compulsive checking, reassurance seeking or avoidance behaviours, then you could be suffering from Obsessive Compulsive Disorder. OCD operates across the spectrum of problems that can include irrational fears and self doubts about harming others, security, contamination, sexuality, perversion, body sensations and relationships. These irrational fears, self-doubts and associated compulsions can be effectively treated using specialised forms of Cognitive Behavioural Therapy.

We provide specialised CBT treatment for Obsessive Compulsive Disorder from our clinics and consulting rooms in Sevenoaks, London and online via video link. We also have over 200 BABCP accredited Cognitive Behavioural Psychotherapists on the team working across the UK from Inverness to Torquay. All of our CBT specialists have achieved the UK gold standard in the practice of Cognitive Behavioural Therapy, offering CBT appointments on a face-to-face basis or online via video link. We are confident that you will not find better qualified or experienced CBT specialist to help with Obsessive Compulsive Disorder. you can make an initial enquiry by completing the contact form on the right side of this page or you can search for a therapist by postcode in the search box provided. If you need help please call (01732) 808626 or email appointments@thinkcbt.com

What is Obsessive Compulsive Disorder?

The negative intrusive thoughts and obsessional thinking patterns are highly distressing and often repugnant to the individual. The repetitive behaviours or rituals are accepted as irrational but highly habit forming and incredibly difficult to break. OCD can be referred to as "Covert" where the obsessional thoughts and compulsions are internalised as mental habits or routines, or "Overt", where the compulsions are externally observable and involve repetitive behaviours or rituals. Covert forms of OCD are sometimes referred to as Pure "O". This involves a primarily obsessional form of OCD, where it is often difficult to distinguish between the obsession and the mental ritual.

OCD can be viewed on a spectrum and is clustered together with other disorders including Body Dysmorphic Disorder and Body Focused Repetitive Behaviours – BFRBs which include skin picking, nailbiting and hair pulling behaviours. OCD commonly occurs along side other anxiety or mood problems including Generalised Anxiety Disorder and Depression.

You can read our article on Obsessive Compulsive Disorder (OCD) and find out more about the most effective forms of CBT treatment. You can also visit our pages on Hyperawareness OCD, Sensorimotor OCD and Relationship OCD - ROCD.

How Obsessive Compulsive Disorder is Maintained

OCD is maintained by an attempt to control, avoid or neutralise obsessional worries, doubts, negative self-appraisals and the associated anxiety. This involves three complex psychological processes known as negative reinforcement, inhibitory learning and behavioural conditioning or association. Understanding how these psychological processes operate is essential to effective treatment. 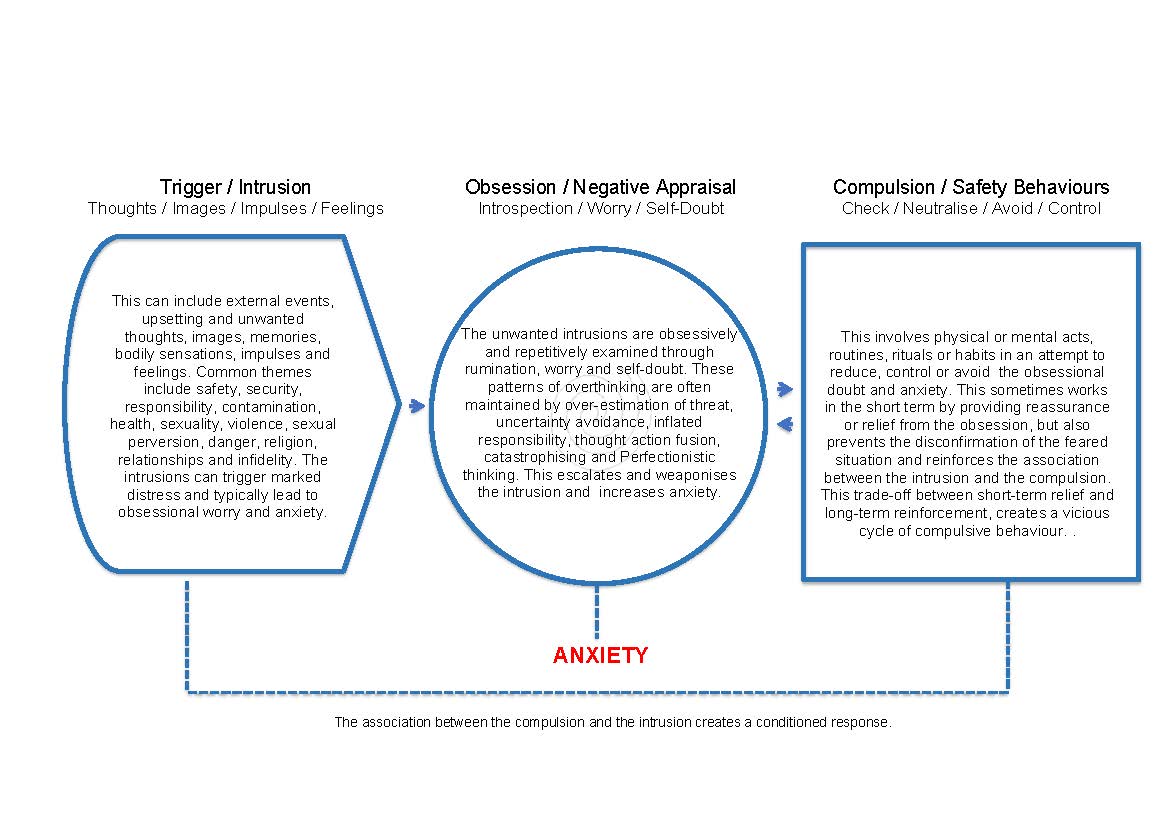 OCD sufferers attempt to prevent or neutralise the obsessional worry and anxiety, by trying to stop the thought or carry out the compulsion. This provides only temporary relief and serves to strengthen the reciprocal relationship between the negative thought and the compulsive behaviour. Whilst performing the compulsion provides temporary relief, it also prevents the disconfirmation of feared situations and strengthens the association between the negative thought and the compulsion. Research also demonstrates that attempting to stop negative thoughts actually increases the preoccupation with the thought itself and the associated level of anxiety. Over time, compulsions can become so ingrained that the OCD sufferer is no longer aware of the intrusive and obsessional thoughts.

A number of OCD related cognitive patterns have also been identified as maintenance factors for OCD, these include:

For an OCD diagnosis to take place: 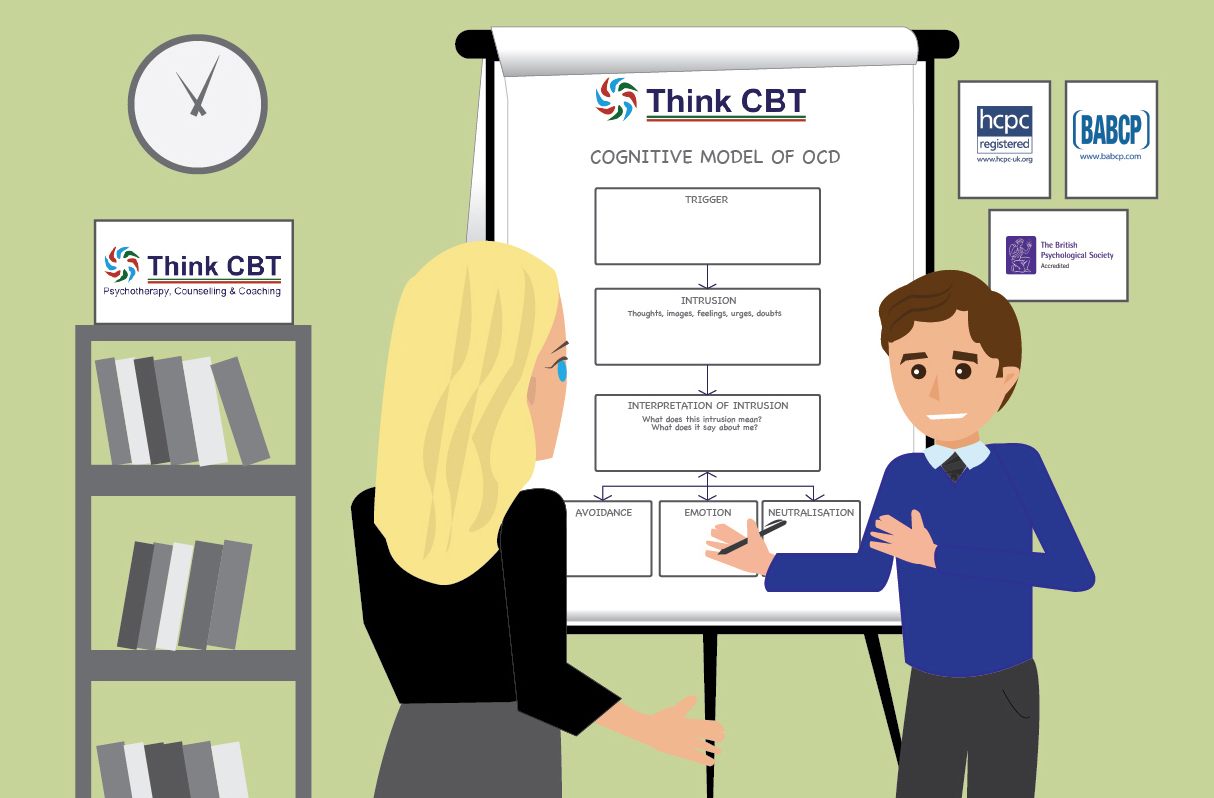 Obsessive Compulsive Disorder is treated using Cognitive Behavioural Therapy and / or SSRI medication. Whilst SSRI medication can reduce the intensity of the symptoms, the recommended treatment of choice is CBT.

Some of the counselling approaches from the Psychoanalytic and psychodynamic field have proven ineffective and in some cases can actually make the problem worse by encouraging increased introspection and self-doubting.

OCD sufferers are advised to follow the NICE guidance and only use Cognitive Behavioural Therapy or prescribed medication in the treatment of OCD. ERP, ACT and IBT treatments can be highly effective when integrated into a structured CBT plan.

If you want to talk to a Cognitive Behavioural Psychotherapist about OCD, you can complete the simple contact form and we will organise an initial free telephone consultation.  You can also take the confidential Obsessive Compulsive self-assessment by clicking on the following link:

OCD is a single term given to describe a wide range of anxiety related problems that tend to follow common cognitive and behavioural patterns. Whilst there are numerous variations on the problem, OCD will typically involve one or more of the following areas:

Checking Behaviours - Continuously checking or testing things to minimise perceived risk or threat. This could include switches on the cooker, locking doors and windows or repeatedly asking questions or asking for verbal reassurance.

Symmetry and Orderliness - This involves a compulsion to ensure that everything is lined up, in it's correct place and feeling " just right". This is done to maintain a sense of security and control, to prevent discomfort or sometimes to avoid worries about something bad happening.

This continuous checking can disrupt and interfere with daily routines and cause isolation as the sufferer attempts to strictly control the situation or their environment. Examples of Symmetry and Orderliness behaviours include:

Physical / Mental Contamination Fears - This involves extreme worries about real or "magical" threats such as bacteria, viruses, chemicals, bad luck, bad numbers and the names of illnesses. Sufferers become preoccupied with cleansing, avoiding possible sources of contamination and attempting to limit the potential for cross-contamination of "safe" areas.

Covert internal rituals or routines are often used to reverse or neutralise bad words or ideas. Contamination avoidance behaviours include:

Hoarding - This involves compulsive collecting, difficulty discarding and problems organising the saved or acquired items. This usually results in cramped living conditions as the hoarding habit takes over all available living space.

There are three main anxiety factors that maintain hoarding habits. These are prevention of harm to others, depravation worries and increased emotional attachment to the objects. Hoarding behaviours include:

Intrusive Thinking / Rumination - This involves the continuous recurrence of personally repugnant and disturbing thoughts, images or impulses that are highly distressing and often relate to violence, sexuality, morality, danger, or acting in an unacceptable manner.

Attempts to neutralise the extreme anxiety brought on by the intrusion, creates a vicious cycle as the sufferer becomes preoccupied by their attempts to suppress or control their thinking, continuous self doubting and constant self questioning. In it's pure form, Obsessional OCD is terrifying and profoundly undermines the sufferer's sense of personal integrity, morality and sanity. Intrusions can cover:

If you are experiencing problems with OCD, you can take our OCD self assessment questionnaires by clicking here.

Cognitive Behavioural Therapy for OCD brings the same rigor, structure and focus that it provides for many other psychological, emotional and behavioural problems.

Follow the evidence and take a positive step towards changing your situation.
Call us now on 01732 808 626, click here to send a message or email us at info@thinkcbt.com. You can also find out more about our services by clicking this link. 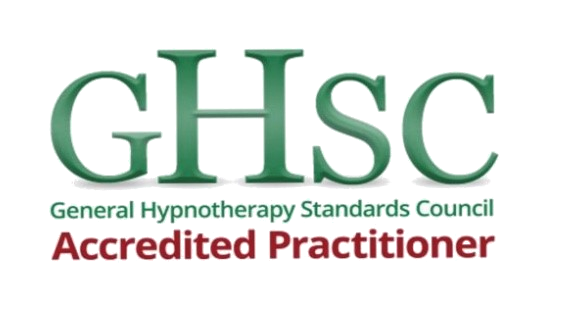 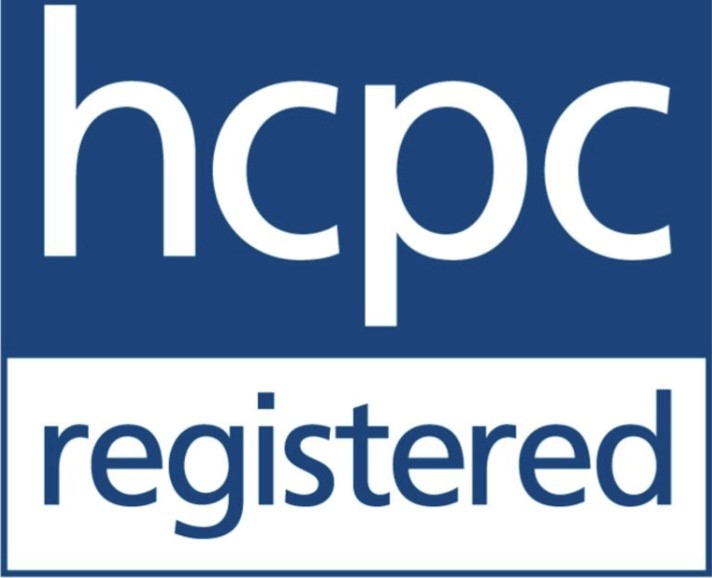